It’s no secret that Lance Armstrong is an extremely competitive person,  not that that’s a bad thing. That is exactly why it’s hardly a stunner that Armstrong hasn’t been content after all to stand aside and support Astana teammate Alberto Contador during the Tour de France.

Does someone like Armstrong, who won seven Tours in a row, re-emerge from "retirement" to be anything other than The Man? Of course not, that’s not how it goes.

When Jordan came back to the Wizards, was he satisfied playing second fiddle to the younger players on the team to help them learn how to lead, maybe even coming off the bench if it was to help the team’s progress? Get real. Though Jordan’s body no longer allowed him to duplicate his former physical splendor, his mentality had not changed, and he conducted himself as such — at the expense of the team.

The difference with Armstrong is that he’s not much weaker than he was before, if at all. He’s still a virtuoso capable of controlling the action; Lance in the Alps is akin to Federer at Centre Court. And he knows it.

But then there’s the matter of Contador. When Lance returned to Astana, he was coming back to a team that featured the Tour winner from just two years ago. Contador was not initially pleased, intending to join another team, but he was contractually obligated to Astana. However, Armstrong said the right things. This is from their first press conference back in December:

I think Alberto has obviously a tremendous amount of natural talent, and can read a race. I have a lot of respect for this man. I can’t say it any simpler. This guy is the best cyclist in the world. There are certain unwritten laws in cycling; the others ride to support the strongest rider. Whether it means supporting Alberto or Levi [Leipheimer] or Andreas [KlÃƒÂ¶den], I’ll do that.

I’ll translate: While saying these words, here is what Armstrong was thinking:

I am the strongest rider. And when I prove that, Contador will ride for me.

There’s nothing wrong with this attitude, it’s just the way Armstrong is wired. He’s the ultimate competitor, someone who dominated his sport for the better part of a decade. Armstrong said he’s coming back to stir up attention for cancer research, and I don’t doubt that this is true. But he didn’t come back to be a domestique. 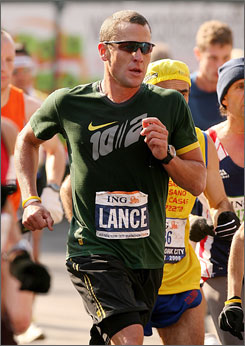 However, Contador made his major statement in Stage 15, proving that he’s the best climber in the Tour. Armstrong simply couldn’t keep up, which isn’t completely an indictment of diminishing skills, as he was never the best in the mountains. But Armstrong always had the most determination, the best team and the best strategy. Now he has tasked himself with defeating someone who shares most of those attributes with him. And you do have to wonder whether it would have been a different story for the Armstrong of three or four years ago.

For Armstrong, this is business as usual. Much as Jordan used to do and Tiger does now, Armstrong drives himself by continually finding new challenges — even if he has to invent them himself. It’s what has made him so successful as a rider, in the business world, with his corporation, and as a marathon runner. It’s an incredibly admirable quality, one very few have but all should aspire to.

Contador is just a new challenge. In the past, his huge rivals — Jans Ullrich at the forefront — were on different teams. Now Armstrong has given himself the conundrum of attempting to defeat a young titan on his own team. And with Contador poised to win, Armstrong has verbally ceded that he will attempt to help his teammate win. Granted, he has no choice — it would be near impossible for him to win at this point.

Usually, teams pick a leader right off the bat and everyone else works for that individual’s success. The situation for Astana is reminiscent of that of T-Mobile 2005, when Ullrich, Alexandre Vinokourov and Andreas Kloden were all prime contenders to win the Tour, and mostly rode in their own respective self interests.

None of the three won. 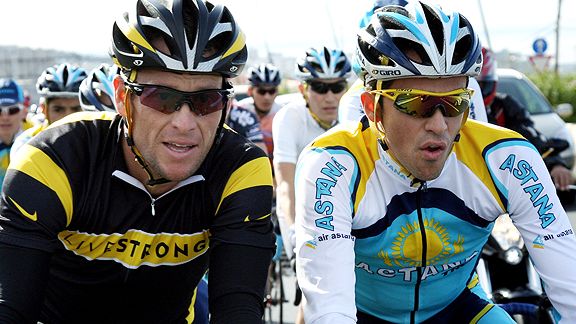 This will not be an issue with Armstrong and Contador, who are the two strongest riders in the Tour. It appears that Contador will win, while Armstrong is currently in second.

Contador’s ability to essentially lock up the tour is impressive. Contador is talented, but taking on Armstrong is a whole other level. Contador has won the Tour, true — so had Ullrich, who never could beat Armstrong. Armstrong most likely had the support of his team and Bruyneel, and he has the greatest drive in professional sports. For Contador to conquer this proves that he is an outstanding individual performer.

Long-term? Contador finds his own team for next year, and Armstrong keeps on his hustle for one more — maybe — Tour, free to be Contador’s rival without the limitation of being on the same team.

Then on to the next challenge.