Later than usual with this, and just one thought and some NFL picks. Been a busy week and had some other stuff to write, including one article IÃ¢â‚¬â„¢m hoping to see on the Dime Magazine site this week. 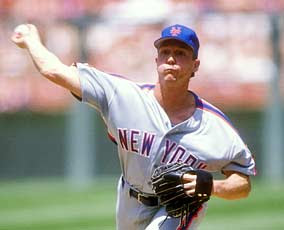 ItÃ¢â‚¬â„¢s no secret that the older we get, the more jaded we are, especially when it comes to the way we watch sports.

I remember watching the final game in 1991 for a 77-84 post-Strawberry Mets team like it was Game 7 of the NLCS, as David Cone struck out 19 batters and had the chance to tie the record, but retired Dale Murphy with a groundout to end the game.

I remember sitting on the literal edge of my seat on the couch, praying that Cone would dig deep and join Clemens in the record books.

Twenty years later, my perspective has of course changed. The Mets, famously, have never had a pitcher throw a no-hitter, and R.A. Dickey took one into the seventh inning this afternoon. And I opted not to watch it.